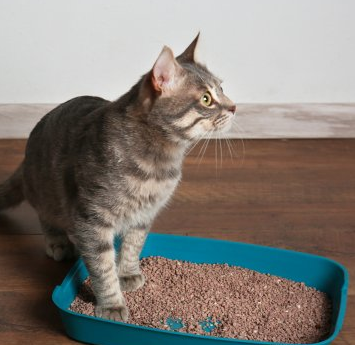 Sometimes, your cat’s litter box location doesn’t work out. Maybe your cats don’t feel comfortable going into the room you put the box in. Perhaps one cat is scared of an object in the room.

If your cat doesn’t feel comfortable and safe in the room, you placed the litter box; they won’t use it.

It doesn’t matter how clean the litter box is. If there’s the slightest bit of discomfort, your cat isn’t going anywhere that clean, shiny litter box.

Maybe the cats are having a territorial feud. Or you found out your wife is pregnant and don’t want her near the litter box.

To make sure your cat keeps using her litter box, you need to move it from the spot as soon as possible. It’s not a good idea to suddenly change locations on your cat.

Cats are sensitive to any changes in their environment, and they could get stressed and not start looking for the litter box right away.

Moving the litter box too fast could make your cat start using the bathroom outside the litter box, the habit you tried to keep from happening.

There are two ways to move your cat’s litter box.

At the end of this article, you’ll know how to effectively relocate a litter box for your cat, regardless of what method you decide to use.

Before you move the box

Take some time to observe your cat. You’ll want to watch where your cat spends most of her time and what rooms she stays away from.

When moving the litter box, you’ll want to keep your cat’s health in mind.

If your cat can’t get up and down the stairs easily, you don’t want to put a new litter box up or down the stairs. If you have a multi-cat household, try to watch to see who is the alpha cat.

When you move the litter box, you’ll want to keep the cat’s personalities in mind. If any of your cats are afraid of the alpha cat, they won’t want to use the litter box the alpha uses the most.

This isn’t the most popular way, but it keeps your cat from getting stressed out from a sudden change.

Cats don’t like change in their environments, and in a potty emergency, they won’t be paying attention where you put the new litter box.

Every day, after you’ve scooped out the litter box, move it a few inches towards the room you want to put it in. Repeat this every day until you put the litter box in its new location.

Your cat will notice you’re moving the litter box, but it won’t be as jarring to them as it would be if the litter box suddenly disappeared.

Switch it up with a new litter box.

This one is going to involve buying a new litter box. It’s easier than gradually moving the litter box little by little, but the cat will need to use it for at least a week before you can remove the new box.

Like with the first method, be sure to gradually move the old litter box from the old location to the new location. When the cat is comfortable with the new litter box, you can do what you want with the old littler box.

Avoid moving the litter box next to the food bowl. Cats don’t want to go to the bathroom anywhere they can smell food.

The new location should be convenient for both you and your cat. Your cat should feel comfortable using the litter box in its new location. It should be placed where it’s easy for you to clean it every day .

Avoid putting it next to loud machines. If you have an extremely skittish cat, placing it next to appliances, like the washer and dryer, aren’t recommended.

The noise from these machines could make them scared to use the bathroom in the new litter box location. You’ll be needing to move the litter box again.

Think of your cat as a high-maintenance roommate that doesn’t like change. If things are different about your cat’s environment, she won’t take it very well. It’ll become a stressful situation for her.

Whatever changes you make to your cat’s environment should be done slowly to make her comfortable with whatever change you plan on doing.

It takes a lot of time to get your cat used to any change, but it’s worth it. Your cat will feel comfortable, and you’ll keep her wanting to use the litter box no matter the changes you make.